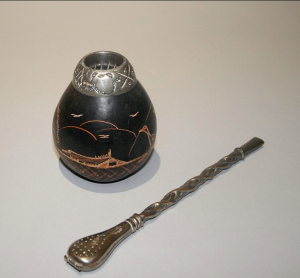 Yerba mate and its accompaniments, such as this mid-20th century Argentine mate gourd and bombilla (straw), have permeated the history and cultures of South America for hundreds of years. Yerba mate (Ilex paraguariensis) is a holly plant (See Fig. 2) native to regions of Argentina, Brazil, Paraguay, and Uruguay. Based on early Spanish colonial texts, the indigenous Guaraní, who called the plant ca’a or ka’a, consumed the leaves’ extract; however, the context or method of their use of the leaves is unclear. 2 By the late 16th century, Spanish colonial settlers living in what is now present day Paraguay began to drink yerba mate, and the drink soon gained a prevalence across South America that bridged social groups, from elite politicians (See Fig. 3) to rural working class families (See Fig. 4) 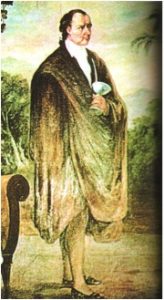 Prior to Spanish colonial presence in South America, the Guaraní most likely were already using dried and hollowed out calabash gourds to drink yerba mate (in fact, the word mate is derived from the Quechua word mati for gourd). 6 When dried, calabash gourds make hardy containers, and are used for bowls and cups by numerous communities across the world. Repetitive tea brewing seasons the gourds as their porous surface absorbs the flavor of the mate. 7 The introduction of silver decorations to the drinking gourds was both a utilitarian adoption and an expression of wealth. In some cases, silver was added to the rim so that the metal bombilla would not damage the gourd’s edge, thus preserving the gourd for longer use, and in others the entire gourd was replicated in silver as a luxury item, a style that emerged in the end of the 18th century. 8

To avoid swallowing the yerba mate leaves, which are brewed loose in the cup, a bombilla is needed. The earliest straws were most likely cane stalks, and later were replaced with silver straws that incorporated a strainer in the base (See Fig. 5).

The Spanish colonies in South America were required to provide set amounts of tribute to the Spanish crown, generally gold or silver, but the tribute was expanded to include yerba mate once the Spaniards realized its economic importance. 10 To supply the needed yerba mate, colonial agents forced indigenous populations to harvest the yerba mate in the hinterlands, where it grew naturally. This changed with the arrival of the Jesuit missionaries, who set up missions, also known as reductions, for indigenous peoples. The Jesuits took a keen interest in yerba mate and its cultivation and began to domesticate the plant, which was difficult as the yerba mate’s hard seeds had to be treated before planting in order to germinate. 11 The Jesuits wanted to cultivate the plant partly as a method of maintaining control over the indigenous peoples living in their missions – a control which was threatened by the need for indigenous workers to leave the settlements to harvest yerba mate leaves.

While religious entities’ opinions on the consumption of yerba mate as either an acceptable drink or a “pagan” and “demonic” substance vacillated, it could be exploited by colonial forces to increase labor. 12 In the 16th century, Governor Hernando Arias de Saavedra noted that the indigenous communities drank yerba mate to increase their energy and prevent fatigue, and the Jesuits described it as a preventative against drunkenness. 13

Another link between yerba mate and colonialism was the silver used for the bombillas and as decoration on the gourds. In the early 18th century, the silver used would have likely come from the Viceroyalty of Peru, where the Potosí silver mines were located.

Across the Atlantic Ocean, the Gin Bottle was also linked to colonialism.

Drinking as a Performance

In ethnographic interviews, Argentinians describe how drinking mate not only structures their day but also provides connections to family members, friends, and even strangers. Dr. David William Foster notes yerba mate’s ability to transcend social classes, “No matter how high you go on the social scale, no matter how high you go on the intelligentsia scale, everybody is drinking mate.” 14 One poignant example of the power of sharing mate is that during the height of the AIDS epidemic, a number of doctors made a point of sharing their mate with HIV positive individuals to assuage the public’s fears of contracting HIV. 15

While yerba mate is similar to tea, it is brewed and drunk quite differently. The brewer infuses water with yerba mate directly in the cup, and then uses the bombilla to filter out the leaves while drinking. In a social situation, the brewer passes the gourd to a companion who drinks the full cup, after which additional hot water is added to the gourd and it is passed to the next person. 16 The communal nature of drinking yerba mate is one of the drink’s most noted aspects by foreigners. First person accounts from the 17th and 18th century include descriptions of sharing one bombilla and gourd between a group. The communal nature of this drinking practice was often recorded as distasteful for European visitors and marred the otherwise pleasant act of drinking mate. One observer wrote, “the most odious observance in the ceremony [of drinking mate] is that it is passed from one another; beginning with the stranger.” 17

Other aspects of drinking yerba mate index the drinker’s knowledge of the process. A 17th century traveler described his bewilderment when introduced to the ritual of drinking yerba mate, and highlighted the difficulty of mastering the drinking technique without burning his mouth or clogging the bombilla, which are predicaments that are still prevalent today. 18 Currently, there are a vast number of online tutorials and how-to videos that demonstrate mate brewing, which illustrates both a common desire to master the preparation and drinking of yerba mate – potentially due to the communal nature of it use – and also the recent rise in popularity of the drink internationally (see the video above for one example of a mate brewing instructional video).

While a 1950s American hostess certainly wouldn’t drink from a coffee cup and then pass it to their guest, the performance of preparing and serving coffee is just as important for them as for an Argentinian serving their guest a cup of mate.

While yerba mate was – and still is – an important staple in many South American nations, it did not gain traction in outside markets until the latter part of the 20th century. 19 This lack of appeal internationally stands in opposition to tea and coffee, which were introduced to Europeans almost simultaneously in the 17th century. Similar to early support for coffee and tea, yerba mate was promoted for its medicinal properties (the Jesuits extolled it as a cure for digestive troubles, a treatment for sunstroke, and a preventative for drunkenness), and it is still advertised as having health benefits in both local and international markets. 20 Despite a strong interest from South American countries, including Argentina, in finding global markets for yerba mate, these markets did not materialize for a number of reasons, including the difficulty of transplanting the trees, and the lack of marketing that differentiated it from coffee and tea, and Spain’s prioritization of it as a form of tribute and not an economic investment. 21

In the mid 20th century, mate would likely have been unheard of in America, but would have been a notable cultural practice for tourists visiting Argentina, or other mate drinking countries. This object was possibly purchased as a souvenir during a visit to Argentina. In the mid 20th century, the Argentine government began to formalize tourism policies to attract both local and international tourists, which included ads in foreign magazines and papers. 23 One of the effects of this policy was the canonization of specific national imagery. And, while the gaucho (South American horseman) was not one of these official government sponsored images, he was a widely adopted popular image employed in literature, dance, and music as part of an Argentine national identity formation in a period of immigration influx in the early 20th century. 24 The image of the gaucho riding his horse with his bolas (two balls attached together with a string that are used to entangle a catch’s legs) swinging above his head (Fig. 7) would have, therefore, been a fitting image for a souvenir item to remind one of their travels to Argentina.

While the trade relations associated with this mid 20th century mate gourd and the other items in this exhibition differ greatly, they were all implemented as trade items within their own contexts. See the Gin Bottle, the Mastos, and the Boontonware Cup and Saucer for more information on their specific relations to trade and commerce.