The “Mastos” or breast-shaped drinking vessel with a nipple at the bottom is a relatively rare form produced by Athenian potters in the later 500s BCE.1 It was designed, both in form and decoration, for use at a symposium–a social event with ritualistic elements and a heavy emphasis on drinking wine.2 The deep, glazed bowl of the vessel indicates that it was used for liquid while the Dionysian iconography strongly suggests the liquid was wine. 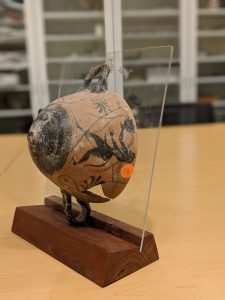 Distinctively, in many cases, the handles of mastoi are oriented in different directions (Fig. 1), which might indicate something about how the cups were used or stored.4 Art historian Beth Cohen proposes that since this shape has a deep bowl, the user must hold the vessel from the mug-shaped handle to drink comfortably. The other handle could then be used to hang the mastos on a wall when not in use, suspended by the horizontal cup-handle.5 By this logic, the handle system, “should have been characteristic of the nippled form regardless of the technique of decoration.”6 However, there are examples of mastos with symmetric and identically oriented handles (Fig. 2)–making it difficult to draw an unambiguous conclusion about their use. 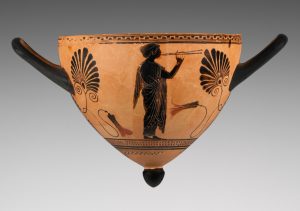 Many mastoi are earthenware ceramic bodies.  This type of ceramic is usually made with naturally occurring common clay, but other materials may be added to improve both the working and firing properties. Depending on the clay mixture, a range of colors can be produced after firing including earth tones such as yellow, grey, red and brown.  Types of earthenware include slipware, majolica, creamware and terracottas.8  Once fired, clay can not be repurposed for another use, is not affected by the elements and its minimal material value makes it undesirable for looting. Vulnerable only to fire, breakage or scratches,9 this type of pottery is extremely durable, and therefore strongly reflected in the archaeological record and many times reflective of a cogent historical timeline.

Though much less frequent, the mastos shape was rendered in other materials.  The Metropolitan Museum of Art has seven examples of mastos rendered in glass without ornamentation (for example, Fig. 3) and all labeled as Greek from the 2nd–1st BCE.10 The Beazley Archive, a world center for the study of Ancient Greek painted pottery, catalogs a bronze example which is possibly from Cyprus.11 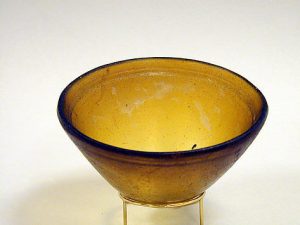 Although separated by manufacturing process, maker and almost 2,500 years, the material of the “Boontonware” cup and saucer is similar in its ability to endure.

In the Beazley Archive, every mastoi (distinguished from the flat-bottomed ‘mastoid’ shape) except one is labeled as Athenian and most (thirty-five) are dated to 550-475 BCE with two being dated from 500-450 BCE and one from 600-550 BCE.13 The lone example that is not Athenian is a Cypriot bronze while the Metropolitan Museum of Art has multiple examples of Greek mastoi rendered in glass from the 2nd–1st BCE.14

While many mastoi are identified as Athenian, a rich trade existed between the Greeks, other Mediterranean civilizations and especially with parts of modern-day central Italy called Etruria.  This area, consisting of separate towns which loosely formed a trading unit called the Etruscan league, imported a large number of wares made in Greece and specifically Athens.  Some imagery on Greek pots was specifically aimed at the Etruscan market. However, Professor of Ancient History Robin Osborne, argues that while Etruscans were avid consumers of Athenian pottery, generally the demand did not determine the iconography of the figure scenes.  Instead, Etruscans imported a vast amount of ceramics with varying scenes and then mimicked those that were appealing in locally produced pottery.15

Trade relations differed between the Mediterranean world of 500 BCE and the Dutch colonial trade network of the 18th century as epitomized by the 18th century Dutch gin bottle, however, both vessels facilitated trade between nations. For additional information on different types of commerce and trade in the 20th century, see the Argentinian Mate Gourd and the American-made “Boontonware” cup and saucer.

Many mastoi exhibit similar types of decoration and ornamentation, while others have even more elaborate designs in addition to black figures. In its most basic form, a glazed basin “prevented absorption of liquid by the porous clay”16 (Fig. 4). Around the outside of the mastos, narrative themes such as combinations of the Greek god Dionysos, dancing maenads and satyrs are common in the Archaic period (8th-5th century BCE)17 as on the “Terracotta mastos” attributed to Psiax (Fig. 4). In this example, a maenad is illustrated on one side and on the opposite side is Dionysus.  The maenad figure is a female devotee regularly associated with the god Dionysus18 and/or a mythical satyr–a man with the ears and tail of horse, pictured in a state of sexual excitement (Fig. 1).19 The mythical satyr along with the maenad is, “so regularly associated with Dionysus as to signal the Dionysiac world even when the god himself is not represented.”20 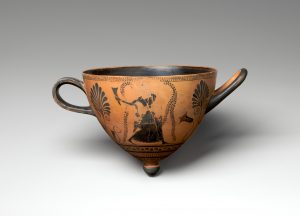 Other mastos exhibit large eyes and sometimes a nose on the sides of the vessel in addition to Dionysian iconography (Fig. 5). When the drinker lifts the cup to his lips by holding the foot rather than the handles, the effect is that of a guise in which there are eyes and a nose, while the handles are ears and the foot could possibly be a round mouth.22 In these cases, the mastoi iconography and decoration was related to the vessel’s function as a wine cup.23 The Dionysian iconography indicated and reflected an experience in which wine was an “encounter with the gods”24 and the mask-like image revealed the drinker in a state of “stupefaction” or possibly insanity.25 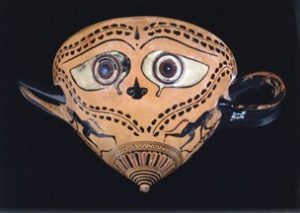